Sleeping under Volcanoes in Guatemala

- March 04, 2012
Not really but next time I am in Guatemala I will be.  I was in G city for 3 days and I didn't really get to see what I wanted to see.  If this was a personal trip I would never stay in a hotel in capitol city.  I would much rather go explore places like Tikal, Atitlan, beaches anywhere except the city, but beggars cant be choosers and in the end I'm happy to even set foot in this beautiful country. City wise it felt like I was in Mexico City, but obviously much smaller.  But the feeling was the same, traffic, buses jam packed with people hanging out the door, street vendors and people everywhere. 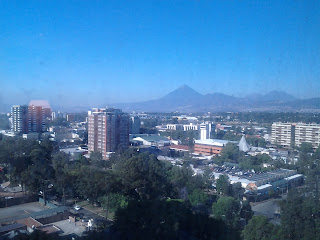 The food was amaaaaaazing! In three days I had about 3 different types of tamales, platanos fritos, black beans, longaniza, chorizo, adobo, pupusas and about a ton of rice. 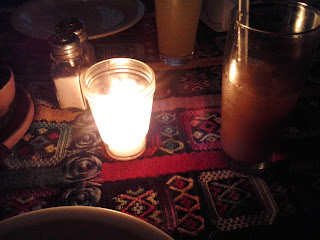 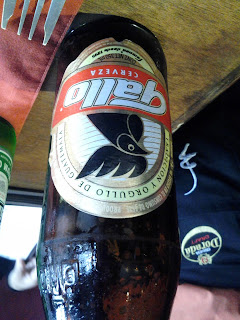 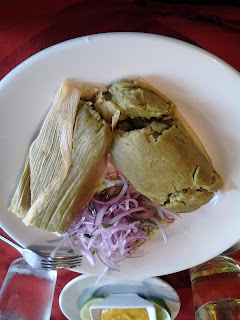 Finally on Thursday I was able to visit Antigua for a couple of hours. Antigua means "Ancient Guatemala" and was the capital city in the 18th century.  It has traditional Spanish Baroque buildings, cobblestone streets, central park (aka Plaza) and Cathedrals & Churches. This is definitely a place you want to see in the daylight! The streets and buildings are so colorful and seeing them in the daylight would have been amazing.  I was there in the evening.  Due to traffic it took us about 2 hours to get from Guatemala City to Antigua.  I got there around 7pm and left around 9:30pm. 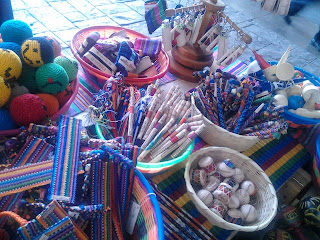 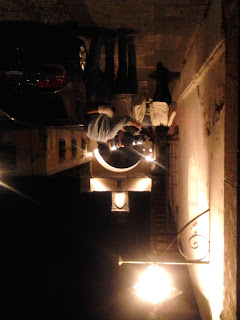 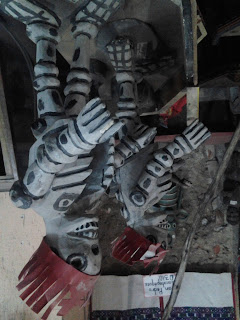 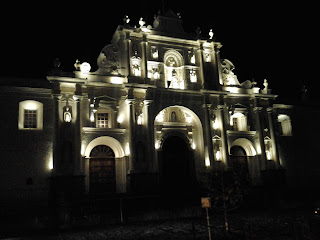 Souveniers arent really my thing.  I love to shop but those corny souvenier shops tend to be filled with items made in china rather than authentic items.  In Antigua there were many indigenous women selling scarves and shawls.  I fell in love with this beautiful red reboso.  Its not even red its like a deep wine color with beautiful gold. Its gorgeous! Only 75 quetzales which is about 8 dollars!  I don't like bargaining with street vendors when I'm traveling.  I always hear people say "you can bargain with them" but why would you? They are obviously working in need of money, they've spent their time and money creating something with their hands and you want to bring them down from 8 dollars to 5 dollars? Really?

Overall Guatemala was really great.  Everyone was really nice and friendly.  I never once felt scared or unsafe.  I met a man from New York who told me he wouldn't leave his hotel room past 9pm because it was too dangerous. =/ It wasn't dangerous at all.  Obviously I'm not going to be walking in the middle of the night down a dark alley. Or flashing my money and camera in front of everyone.  Its common sense! These negative people annoy me.
Anyway, I don't have a camera so these pictures were all taken with my wack camera phone. (and I don't know why the picture orientation is wrong, sorry)

Next trip Bolognia, Italy aaaaaaaaand I finally got my Iphone so I have a better camera check my blog in a few weeks =]

Popular posts from this blog 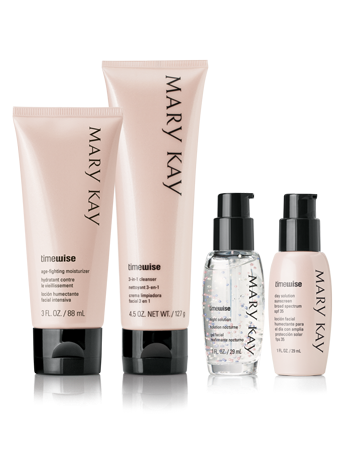 I thought it was about time I invested in a good skin care regimen! It's important to start as early as possible to develop good skin care habits.  I unfortunately did not.  I did follow the one cardinal rule throughout most of my 20's. Don't sleep in your makeup!  That was my one rule.  I would always try my best to wash my face off before going to bed.  But now that I exited the roaring twenties and now thirty flirty and thriving I feel its mandatory to include more steps in the skin care routine.   I purchased the TimeWise Miracle Set for Oily Skin after attending a skin care class where I was able to sample all the products.  I fell in love with the moisturizer!  It leaves my skin feeling so incredibly smooth without feeling any greasiness at all!  I have very oily skin, like nasty oily you could fry an egg with my excess oil!  So I hate it when products are super oily or greasy.  The TimeWise Miracle set includes a foaming face wash that has light exfoliants, the mois…
Read more

- March 26, 2015
I was given the opportunity to test the new reformulated YSL Luxurious Mascara and let me tell you, its DIVINE! Check out the beautiful promo video featuring Cara Develingne!
Sign up with Influenster to receive complimentary products from various companies for consumer reviews.  Its easy! All you do is start a profile, connect all your social media sites and take a few surveys.  You will then be eligible for campaigns and receive coupons and freebies!
Click my referral link to sign up!
www.influenster.com/r/914169

FTC: "I received these products complimentary from Influenster for testing purposes."
Read more

Save Money, Learn to Barter

- March 17, 2013
Vintage Clothing is becoming so trendy that all the prices are skyrocketing alongside its popularity.  An excellent way to keep up with your vintage addiction without breaking the bank is to try and barter! To barter means exchanging goods or services for other goods or services.  Basically it means to trade.  Here are a few tips that work for me that you can try the next time your out treasure hunting.  Remember these tips are for bartering at flea markets, swap meets, and specific vintage shops or consignment stores.  You obviously cant go to the mall and try and barter.

#1 Ask! Yes its that simple, before anything just ask the shop owner if they will accept a  trade.  Depending on what it is you are offering they might accept a clean trade or partial trade
Clean Trade: is an even trade you give and you get without any money being traded.  A partial trade they will accept your item and some % off the cost in cash.

#2 You have to know the value of what it is you want.  Be familiar …
Read more